How much interest the central bank of a country pays directly affects the exchange rates of the country’s currency. The higher the interest paid, the more valuable the money becomes. The same goes for the opposite. If the interest by the central bank is relatively low, the currency will also lose some value. Most investors use this knowledge to multiply their money when the odds of the exchange rates tip in their favour.

If a given government prints excess money, it means that a lot of the money will be in the hands of the citizens. If there is a lot of money circulating in the country, then the prices of services and goods will naturally spike. Such a situation is referred to as inflation, and the currency of the country suffers. Although getting lots of money is everybody’s wish, if this comes true, the money would be pretty useless compared to the currency in other countries. 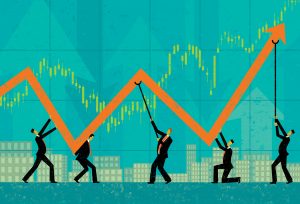 The state of the country’s economic growth also plays a role in the ranking of currencies. One thing that contributes significantly to the economic and financial stability of a country is investments. However, more people are usually willing to invest only when a state is stable. The more investments made in a country, the higher the value of its currency ranks. However, if many people withdraw their finances, the economy suffers, and the currency comes down with it.